Yoga saved me from nights of sleeplessness after an illness

I have a long history with yoga. I started learning it when I was about 13, maybe even a little younger. I suffered from insomnia when I was 11 and 12 and found yoga the only way to cope. My sleep problems were triggered by an illness I developed as a child, the stress of migration and my parents’ divorce. My mother, siblings and I moved to Canada, but my family was originally from Guyana. When I was visiting family there I developed osteomyelitis, which is inflammation of bone marrow due to blood infection. I was deathly sick and lost the ability to walk. I was flown to Trinidad where I was diagnosed but the first surgery was unsuccessful so their solution was to amputate the right leg. My mother, a British-trained nurse, refused and sought out the Canadian embassy to help us return to Canada. The doctors in Trinidad said: “If you take her back she will die,” but my courageous mother took the risk based on her knowledge and faith.

When I got to Toronto I had a series of seven operations and gradually improved. I went through rehabilitation and wore a brace and never lost my leg. I was told that I would walk with a limp and one leg would be shorter than the other. I had experienced extreme pain and was so grateful to be alive that I developed spiritual practice during my illness. I discovered a greater sense of self and strength because I came so close to death.

As a result of my experiences I developed sleep issues and to help with this I started yoga. It wasn’t very common at that time and my family and friends certainly weren’t studying it. I did it privately and there was always a yoga teacher renting a church basement somewhere and books in the public library. I found the experience so profound that I was hungry to study with various teachers using the practice to heal myself.

Please wait...
Want to be notified when our article is published? Enter your email address and name below to be the first to know. 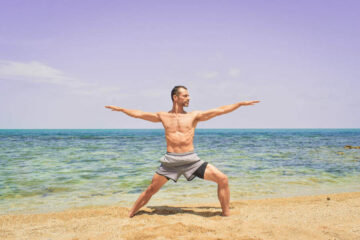 10 Reasons To Do Your Yoga Teacher Training In Thailand

Top 10 Reasons To do your Yoga TTC in Thailand: I started yoga in 2007 and have traveled all over the world studying and giving aerial yoga trainings in Asia, as well as Vinyasa yoga Read more…